Art and creative expression have become an activist tool and alternative form of advocacy for young women in Fiji.

Through photography, theatre, dance and song, young women are finding new avenues for public expression. These innovative avenues for making their voices heard have great power in a context where women’s mobility and visibility is often constrained by socio-cultural norms. So while celebrations around the globe this month marked International Women’s Day (IWD), women in the Pacific celebrated in a number of innovative and creative ways.

They took part in public events that acknowledged the progress made towards gender equality in the 20 years since the Beijing Declaration and Platform for Action. They paraded in New York, they attended the 59th session of the Commission on the Status of Women (CSW). But their IWD celebrations also acknowledged a history of Pacific women activists whose work made the Beijing Platform for Action local and real through the Pacific Platform for Action (PPA). The PPA was adopted by SPC member countries in the lead-up to the Beijing Conference and was revised in 2004 to take account of both the progress made in the region towards certain commitments and emerging areas of concern.

So, for women in the Pacific, there was much to celebrate, both globally and locally. For these activists, their celebrations and parades have an important transformative and empowering role. Marching on the streets of New York and participating in CSW are opportunities for voice and visibility on an international scale, an opportunity which is often not available to representatives of small island developing states.

On the occasion of IWD, young women in Fiji showcased some of the creative forms of cultural expression that have become a powerful tool for the young women’s movement. In Fiji’s Western cities of Lautoka and Nadi, they took part in a theatrical production of Eve Ensler’s The Vagina Monologues, supported by One Billion Rising Fiji. This was followed by a screening of Say a Little Prayer, a film about battered woman’s syndrome – and the first edutainment film directed and produced by a Fijian woman.

Alongside this event, the Fiji Women’s Rights Movement celebrated the graduation of participants from their GIRLS initiative which has trained 39 girls aged between 10 and 12 in theatre production and performance. Not just for fun, but also to improve their confidence and encourage free expression. IWD weekend, said Fiji Women’s Rights Movement executive director Tara Chetty, was an opportunity to share these experiences with family members and the broader community. But it also brought generations of women together in the hope of inspiring young women to become leaders for change in their communities.

These events built on the recent history of using young women’s creative expression in Fiji as a way of ensuring public visibility, while also providing a safe space for women and girls to share their experiences of injustice. In the week-long build up to IWD 2015, Fiji’s young women activists came together in a myriad of other creative ways including:

Why they did all this, and why they did it this way, can be summed up in the words of Roshika Deo, a young women’s candidate in Fiji’s 2014 elections and co-coordinator of One Billion Rising Fiji: “It is very important for us to maintain public visibility.” For young women like Ro 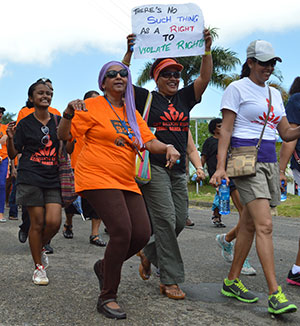 shika, these creative outlets for expression offer women an opportunity to reclaim public space as they voice their struggle for equality.

When used in this way, art and creative expression becomes so much more than adornment and entertainment. It becomes a political act, as powerful as any manifesto. It becomes empowerment.

As Deeyah Khan, award-winning filmmaker and music producer, said in her statement to the UN Human Rights Council last year on the role of art and artists in civil society: Where women’s voices are silenced, women’s self-expression is an act of defiance, of refusal of the strict limitations of gender roles…Art is a form of expression which is often one of the most available, even to the poorest individual; the tools required can be as simple as a voice, a pencil or a humble drum.

This blog was also posted on the Developmental Leadership Program site